Introduction: General tectonics of the region
The region studied herein spans 5 connected tectonic plates that extend from the east coast of Russia, at 61°N 156°E, down through Japan to the southern Phillippine Sea, and soutwestwards to the eastern edge of the Bay of Bengal.

The configuration of the Asian plates has changed significantly through history. In the Eocene around 50Ma ago, the northern part of the Philippine Sea Plate was located near the equator, after which point it underwent a clockwise 90° rotation on a 23°N/162°E Euler pole and began moving northward for the next 25Ma. At 15 Ma ago, it found itself roughly in its current position and rotation had ceased. (Yamazaki et al, 2010) As the India Plate drifted northwards, rotated and collided with Eurasia at an oblique angle, transform forces along the newly created subduction front caused the bending of the Sunda arc. Later, in the Oligocene ~32 Ma ago, further faulting developed and the Burma and Sunda plates began to break off from Eurasia. (Zahran et al, 2007) 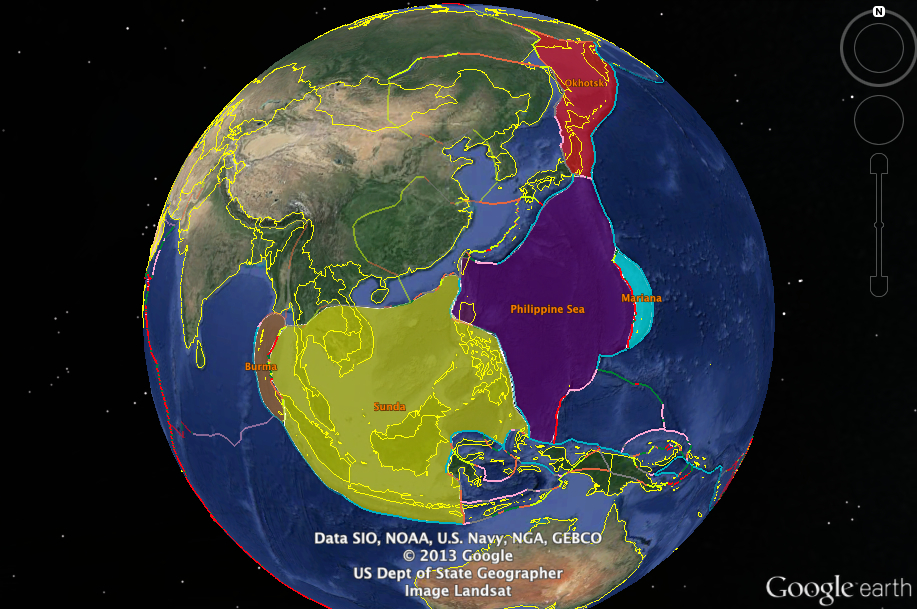 Location of the plates studied in this website. Polygons created using Google Earth.
Today, the northernmost Okhotsk plate has a velocity of 25mm/yr at an azimuth of 138° relative to the Eurasian plate.* (Plate Motion Calculator) This plate is interesting in that it has a wide range of tectonic boundaries at different locations along its edges. Only where Okhotsk meets the Pacific plate is there subduction, yet convergent boundaries relate the Okhotsk plate to both the Philippine Sea and Amur plates. Eurasia and Okhotsk are diverging due to a spreading centre between the two. A transform fault separates Okhotsk from North America.

The Phillippine sea plate has a relative velocity of 51mm/yr at an azimuth of 306°. Interestingly, subduction is occurring along most of its border. Starting from the southernmost boundaries and moving clockwise, there is subduction of the Bird’s Head, Sunda, Okinawa, Amur and Pacific plates under the Philippine Sea plate. The Marianas plate is moving 25mm/yr relative to the Eurasian plate, at a similar azimuth to the Philippine Sea plate: 324°. Marianas is positioned in a west-convex fashion; there is subduction of the Pacific Plate under its east side, and a divergent boundary on the west side.

As for the Burma plate, its velocity is 44mm/yr at an azimuth of 15°; this is a northeasterly direction, whereas the other plates all seem to be moving along a NW-SE direction. Importantly, the Indian plate is subducting under the Burma plate. There is a divergent boundary to the east separating it from the Sunda plate, which makes its relative motion with respect to the Eurasian plate somewhat counterintuitive. Sunda's velocity is 11mm/yr at an azimuth of 91.8°. This plate came to be by breaking off the Eurasian plate and beginning to move as an independent unit. Much larger compared to the other plates, a major tectonic feature of interest on the Sunda plate is the Sunda Trench, and the subduction which dominates the entire southern edge, pushing it up into the Philippine Sea plate.

An interesting feature of this tectonic region is the Marianas Trench, which is the location of the Earth’s deepest point on the ocean floor. Vertical subduction is unique to the Pacific slab in this area, but the resulting Mariana Trough is similar in tectonic setting to the East Scotia Ridge, Antartica; both are important back-arc spreading centres. Of particular interest is Lake Baikal, the deepest lake on Earth, and the Boso Triple Junction between the Okhotsk, Philippine sea, and Pacific plates, features which are explored in this website.

There are a number of natural hazards in this region of the world due to complex motions at the different tectonic plate boundaries. Of particular concern are earthquakes and volcanoes; in addition, the presence of intercontinental seas separating densely populated metropolises means that the threat of tsunamis constantly looms over southeast asian countries. Specific historical hazards include the devastating Sumatra–Andaman earthquake and ensuing tsunami in 2004, and the Japanese Tōhoku earthquake and tsunami in 2011, to name a couple. Indonesia alone, located on the Sunda plate, was the site of 4 of the 10 deadliest volcanic eruptions in history at Krakatoa, Mount Tambora and Kelud.

Though the tectonics in the region have proven to be very destructive, they also happen to be the location of important mineralizations, such as the Ag and Cu that are associated with magmatic arcs. Other advantages include shallow water beaches, which are the result of tectonic subsidence, that support local tourism in Southeast Asian countries.

*All plate motions are given relative to the Eurasian Plate